We're not going to Wembley 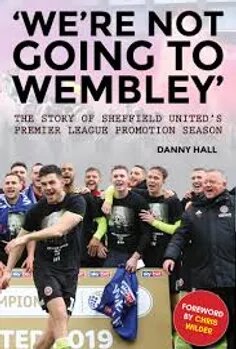 20th December 2018. Zhezkazgan, Kazakhstan. At 0502 GMT the Soyuz MS-09 space capsule touched down on the snow-covered steppe. The crew on board were returning from one hundred and ninety seven days on board the International Space Station. Space walks, satellite launches, a daring operation to patch up a hole in the capsule’s orbital module and hundreds of scientific experiments conducted that would gift a greater understanding of the universe to future generations. It all paled though, at the sight of the enormous parachute ballooning gracefully above the capsule, as it completed its final descent. It was red and white. They were Blades. There could be no other explanation, and these brave astronauts had been facing the prospect of trying to follow Sheffield United’s crucial Christmas and New Year fixtures whilst orbiting the planet at 17,500 mph. As I said in my email to NASA, their decision to return to earth was an inspiration to Blades supporters everywhere.

It was a shame then that the first result following touchdown was a one-all draw with bottom-of-the-table Ipswich. In fact, on paper alone, December was a month of mixed results, including two home defeats by fellow promotion-chasers, Leeds and West Brom. But a more probing analysis reveals the grit and determination that would eventually lead us to the stratospheric heights of second place and automatic promotion.

1st December 2018. Sheffield, England. Approximately 1319 GMT and at that point Leeds had not won at Bramall Lane since 26 April 1992. That distant victory was as big as it gets, securing for our Yorkshire rivals the top title in English football. Since then there’s been chafing with Leeds during other significant races for glory. Both teams won promotion from the Championship in the 1989/90 season, with Leeds beating us to top spot on goal difference. And our next promotion from the Championship in 2006 came as Leeds faded (ah, those two words; read them again if you like), losing their winning ways for much of the March and April of that year. Come 2018/19, the same Race for Space was once again being fought. Space being the English Premier League.

As the table stood at kick off on 1 December – and indeed for much of the game - we were fourth, Leeds were second, separated by two tightly stretched points. It was a simple equation. We would usurp Leeds with victory. Unsurprisingly, both managers were desperate for the win.

Wilder and ‘Loco’ Bielsa come from two very different footballing backgrounds. Bielsa was in charge of the Argentinian (1998- 2004) and then the Chilean (2007 – 2011) national teams, whilst Wilder was managing in the Northern Counties East League Premier Division and in the National League. During Wilder’s time at Northampton Town (2014-16), Bielsa managed Atletico Madrid, Marseille and Lazio. But as equals at the top of the Championship, both have proved highly creative, innovative and competitive. And both have voiced mutual appreciation throughout the season. Wilder has spoken of Bielsa’s stature and his massive influence on the Championship, describing him as “a breath of fresh air to the division” and (when praising Bielsa’s sportsmanship during the bizarre and chaotic last game between Leeds and Villa) “a true football man”. Wilder even spoke with admiration of Bielsa’s handling of the Spygate ‘scandal’. For his part Bielsa considers Sheffield United the team from which he has learnt the most during the 2018-19 season, praising our new style of play and the clear evolution of our players.

The game was an energetic encounter, ultimately decided, not on “a bit of magic or taking a chance” but on a mistake, to borrow Wilder’s words. We were dominant. Leeds were on the back foot. But we missed some big chances and when in the 82nd minute Deano failed to deal adequately with Egan’s overhit backpass, Leeds pounced. Even so, after the game Bielsa recognised that his team had faced a “serious opponent”, and had been forced to defend often and played too much long ball. In his prematch comments at the return fixture in March he conceded that Leeds probably hadn’t deserved the victory.

Come the end of the season – and it might have been the drink talking – the mutual appreciation was side-lined and Wilder’s inner Blade unleashed: “A lot of muppets from Leeds talking about precious honours…they got beat seven times since Christmas. We’ve been beaten once….” That’s part of the joy of watching Wilder in charge at SUFC: the respect he commands as manager held in perfect balance with a genuine supporter mentality. The rivalry will, without a doubt, continue way beyond the 2018-19 season but for now Yorkshire is ours.

Back to December. 14th to be specific. There’s nothing like a wintertime Friday night fixture. Bright lights and Bovril at Beautiful Downtown Bramall Lane. This time we were separated from our opponents, West Brom, by just a single point.

Initially the game looked like it would be a big statement in our promotion push. As against Leeds, we started strongly, “flying down the flanks” according to the Baggies’ Gareth Barry. They struggled to cope and we took an early lead in the 12th minute through a quick counterattacking manoeuvre. But equalising just before half time - against the run of play - gave West Brom the momentum as the second half started. They grew into the game, became the stronger team and we threw it away. A hugely disappointing outcome. Wilder was characteristically candid. “We made some really poor decisions….belief drained out of us…I’m disappointed in the performance of the players. The mentality of the group was flat.” By contrast Darren Moore was able to say: “It’s always difficult to come to Bramall Lane with the passionate support they’ve got [presumably he had in mind here the crew of the Soyuz MS-09], but we got to grips with the game….I knew it was going to be a hard task tonight but each and every single one of them rose to the challenge.”

It was a difficult moment, and another twist at the top of the table. The result took West Brom above us, into third place whilst it was our third home league game without a win. Up next was the meagre, if spirited, draw with Ipswich.

​But this was never a squad of players to be written off. Wilder knew it and fielded an unchanged side for a third successive match when we played Derby, despite the results in our previous two games. And we knew it. Nearly 29,000 of us gathered on Boxing Day to witness the most significant result of December, and possibly of the season - arguably the start of our promotion run, which would see us lose only two more league games.

Yet another strong start, coming close to scoring several times in the opening 10 minutes. Then in the 41st minute O’Connell’s sweeping cross drew a cheeky Sharp header and we were in front (cue fat boy gesture in front of the away fans). Derby found a way back through a trademark Harry Wilson free kick which left Henderson rooted as it clipped the underside of the bar. Another equaliser against the run of play, by another team separated from us by a single point. But this time our response was to dig in, stay positive and pick up the pace, whilst Derby fell away. It became an end-to-end exchange with tempers flaring (8 yellow cards were shown and there’d already been a fight in Henderson’s goal following the equaliser). In the 64th minute the ever-composed McGoldrick was on hand to beautifully lob in from Fleck’s diving midfield header and restore our lead. On the Kop there was a collective observation that the Derby fans were no longer bouncing. 20 minutes later yet another head, this time belonging to Leon Clarke, rose to direct the ball in at the far post, and secure victory. On the Kop, pandemonium. "There's been a lot of noise and nonsense talked about us,” said an animated Wilder after the game, “but I keep telling the players to go out and show everybody what we're all about and I think we did that this afternoon. We jumped all over them second half. The energy levels and performance levels were up there and the support they received was amazing." [Again, the crew of the Soyuz MS-09 come immediately to mind.]

Our final game of the month was brushed aside by EFL on Quest with 30 seconds of highlights, maybe because the match delivered the expected result and there was more excitement to be found in a seven goal thriller between Norwich and Derby. But it was a rewarding game to watch live, wallowing in the pits before turning to deliver a thrilling crescendo that demolished the opposition.

Wilder rightly described the first half as a “grind for us”. It was frustrating and lacking and Blackburn were arguably the better side. When Basham was dismissed for a second yellow card (which, as with the first, seemed harsh) it looked like we would be hanging on for 0-0 and a precious point. For 20 minutes we did. Then Blackburn themselves had a man sent off (not harsh at all - two footed tackle on Sharp), and our fight to stay in the game paid dividends. In the space of nine pulsating minutes, Blackburn were well and truly grounded, with goals from Sharp (lift-off), Sharp again (escape velocity) and McGoldrick (enter orbit). Another three points in the proverbial.

December was a month of spills and thrills but the driving desire to succeed exhibited throughout would continue for the rest of the season: imperfect at times but never at the expense of our growing momentum. With that most beautiful of gifts, hindsight, we can look back on December 2018 and enjoy the pleasing counterpoints that were to come. February saw us victors away at the Hawthorns, March the same at Elland Road. April brought a comfortable win against Ipswich, all but sealing the promotion deal.
​
After a twelve-year absence from top-flight football, surely the entire planet was following our progress? How that would not be the case is unfathomable to me. But NASA never responded to my email. And on closer examination the parachute might actually have been orange and white.